We’ve just returned from a week at the beach, and it was a week full of the usual shenanigans of my squirrel-y family.

I did blog from the beach, but tried to stay away from documenting the vacation as it happened, at Scott’s request. My security- conscious husband spends a chunk of his summer incredulous that his friends and coworkers post “for the whole world to see” that they are away from their house. (see CBS News article on the same) He doesn’t ask for much, so I laid low.

That this year’s trek to the Delaware shore was comprised of a two-car caravan is where the fun begins. Scott and Will were in the lead car, while I drove my mother’s car, along with she and Evan. I’d asked Scott to “jot down the basics” of the trip (which he likes to point out, we’ve made for nine years now) for me before we left. With the highlighted map perched on the dash, I wasn’t at all concerned when we lost sight of his car a few miles south of of the city. But I should have been.

I didn’t actually look at the map for a few more miles, when I discovered that, far from being the door-to-door directions I’d asked for, the map only covered the last 20 miles in Delaware, taking is us to the condo, from Dover. Oops! Definitely a problem, since I’d just gotten onto PA Route 1 (towards Baltimore, Maryland), rather than the totally different Route 1 that I was supposed to be looking for, in about an hour; in Delaware.

I was already second-guessing the move, when my phone rang, and the following exchange took place.

Car 1: “We just passed the Herr’s factory. Where are YOU?”

Car 2: brimming over with confidence….”We just got onto 1 South.”

Car 1: “Please tell me that you are kidding.”

I’d like to say that was my only mistake on the trip down, but things deteriorated from there, completely falling apart when our car, um, failed to pay a toll. Yep.

In my defense (and that’s all you’ll hear on this blog), my mother and I have traveled together extensively, not the least of which being a 9-hour trip to Maine in a previous summer. So, when I put out my right hand for her to give me fifty cents for the toll basket on Route 1 (in Delaware, finally) that I was approaching at a 30 mph cruising speed, I really didn’t expect her to say, “Well, I don’t have any change. Do you?” 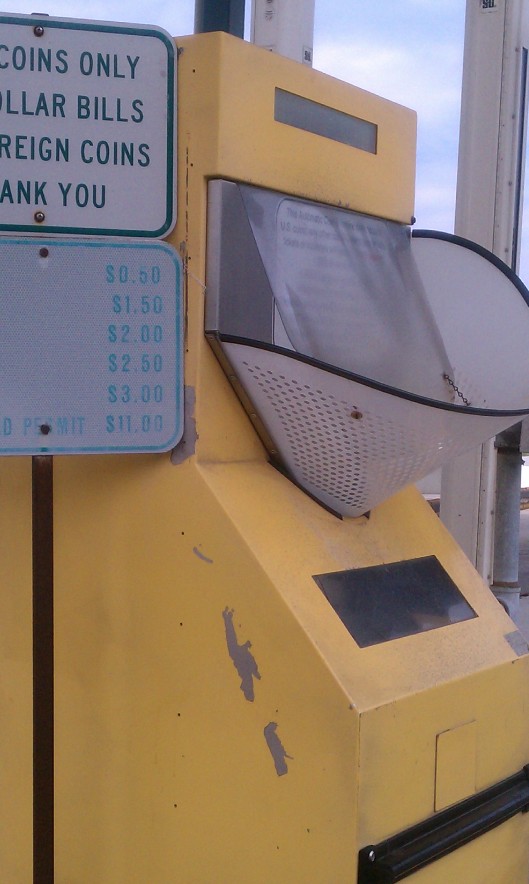 Sure. In Scott’s car, which left the toll both five minutes ago. To say that mass hysteria and unbridled panic broke out in our car would be an understatement, complete with lots of arm waving, yelling,  and searching the seat cushions. I pulled halfway THROUGH and halfway OVER to the shoulder of the unmanned basket, still in stunned in disbelief that my copilot did not have ANY coins. Then commenced the debate about whether or not our license plate had already been snapped by the security camera, or not.

We eventually scraped together twenty-seven cents (I know. Tolls are sort of an all or nothing business, but I felt like I had to do SOMETHING), backed the car up, and threw it in — only the quarter made it anyway — the pennies bounced off of the side and down the highway. I know I speak for my mother and myself when I say that we felt like total criminals.

Me: “I guess we should just head out.”

Mom: “What fine?! I did the same thing just the other day on the turnpike, (Huh?Apparently my mother cruised through a lane on the turnpike where a cashier was “just about to set up.”) and I only had to pay the toll, after I filled out a form telling them what happened.”

(Folds the map in half and starts taking notes for the “story” of our current situation.)

Mom: “You backed up and went through twice, right? Was that before or after we pulled over? How much money did you throw? Right. How much made it in the basket, then?….honey?”

At this point, Evan stopped speaking to both of us and requested to switch to Scott’s car when we met up at the next rest stop. Where, I might add, Scott informed us that there was a CHANGE MACHINE at the booth, about two feet before the basket (which we might have seen if I hadn’t been going so fast in the first place).

Taken on the way home.

Just when I thought I couldn’t feel any worse about the whole thing. We had two dollar bills the whole time.

10 thoughts on “The Vacation Chronicles, Part I: You Can’t Get There From Here”