I finally did it – I made BBQ ribs that didn’t suck! This was probably my fourth attempt over the last couple of years, and all previous entries, while “edible”, were not melt-in-your-mouth tender or tangy.

In our house, I am the grill master, much like my mom was growing up. I don’t mow the yard, like mom, though.  (Any offers to do so have been declined, on the grounds that I wouldn’t do it “right”. Be that way. Fine. By. me.) I can make yummy BBQ chicken, pork satay, steaks, and, of course, burgers. I suspect that the problem with previous attempts at ribs has had everything to do with the prep and pre-cooking of the ribs, BEFORE the grill.

This time, I did it top-shelf, from the start. High risk – high reward.  I started with two full racks of baby-back ribs, at $20 a rack. Right away, the tender factor is way up (twice the cost – twice as tender? I hope so!)

The recipe I used is from Cooking with the Firehouse Chef (2003, Berkley), by Keith Young of the NYFD. The first step is to preheat at 350 and mix the dry rub:

Cover the ribs on both sides with the rub and place in your roaster(s), meat side up with about 1/2 inch of water. I sliced both racks, so that they would fit in the pans. I used the  Pampered Chef stone roaster(s), which I think also contributed to my success. Cover the pan(s) with foil and cook in preheated oven for 45 minutes. 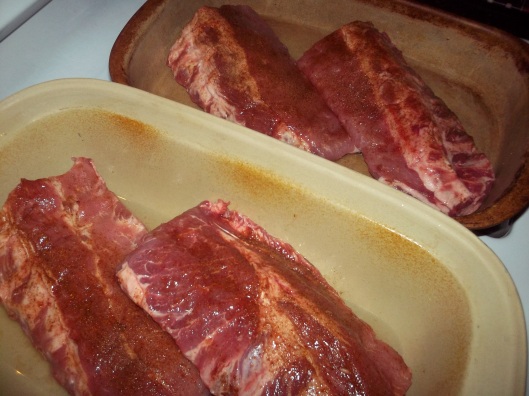 Now, the Firehouse Chef mixes his own BBQ sauce, but I already know what we (especially the boys) like, so I used Sweet Baby Ray’s Original BBQ sauce for the next step.

Uncover the ribs, brush the tops with sauce and continue in the oven, uncovered, for 45 minutes, at the end of which, your grill should be ready to go.

The final step(s) go quickly, so make sure that any sides are done. On the grill, brush with additional sauce and grill each side for 2 minutes (Repeat twice), and they’re DONE!

They were tender, juicy, and a hit with the whole family (including Bailey). Of course, I had to talk about how great they were, the WHOLE time. In my defense, I was so pleasantly surprised with how well they turned out that I couldn’t help exclaiming…OVER and OVER…

“Oh my gosh, these are AWESOME! I mean, how juicy – unbelievable! Restaurant quality! I can’t believe I MADE these!”

I may have laid it on a little thick, but isn’t THAT the point, with BARBECUE?

1 thought on “This little piggy went to market…”